The "greatest Wildlife show on Earth" and certainly one of the most sought-after experiences for wildlife and nature enthusiasts, or even just the curious ….. the Great Migration!

We are often asked about the migration. So, what exactly is this spectacle, and when and where might you realistically be able to witness it? 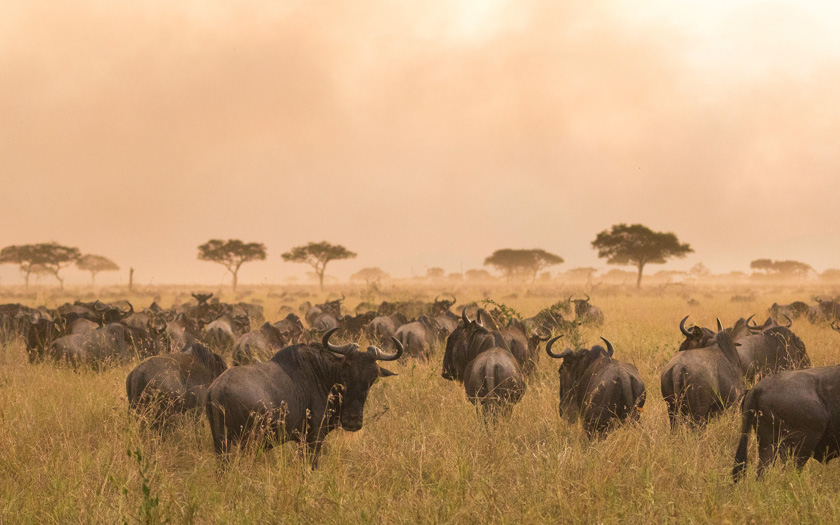 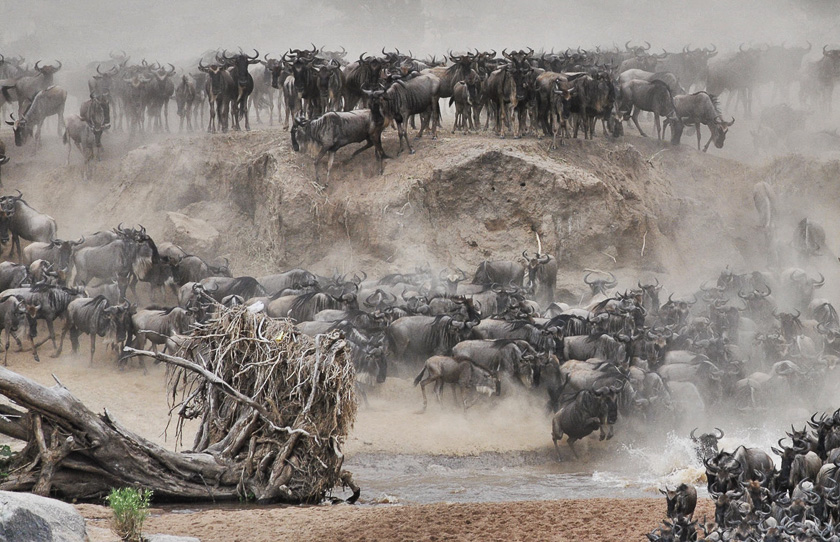 The answer is that the migration is continual; over a million animals are involved in an ever-moving circular migration across the Serengeti-Mara ecosystem of Tanzania and Kenya.

A host of gazelle, zebra joins columns of a million-plus wildebeest, and other hoofed companions follow a similar age-old route searching for grazing and water. Their journey takes these animals across the plains of the Maasai Mara in Kenya, south into Tanzania, through the Serengeti right to the edge of the Ngorongoro Crater, where they circle up and around in a clockwise direction. 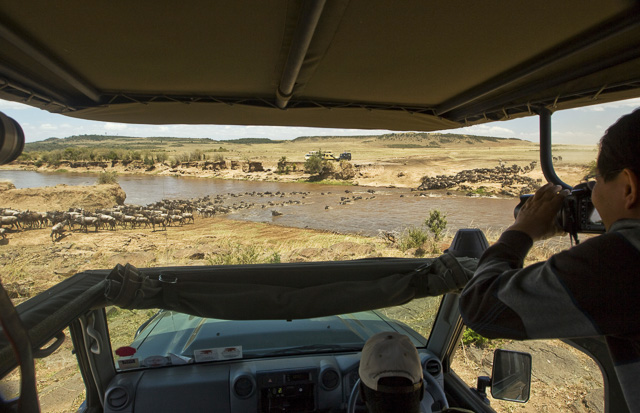 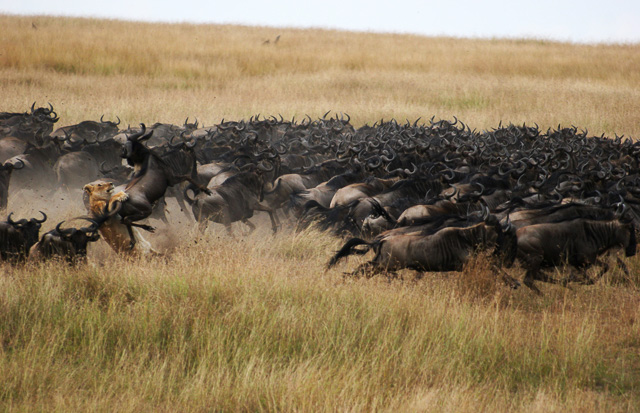 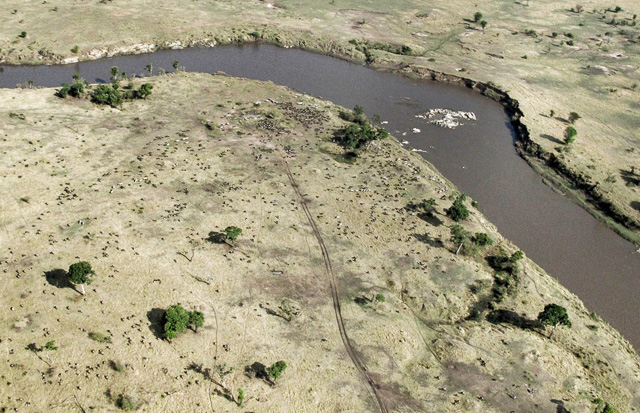 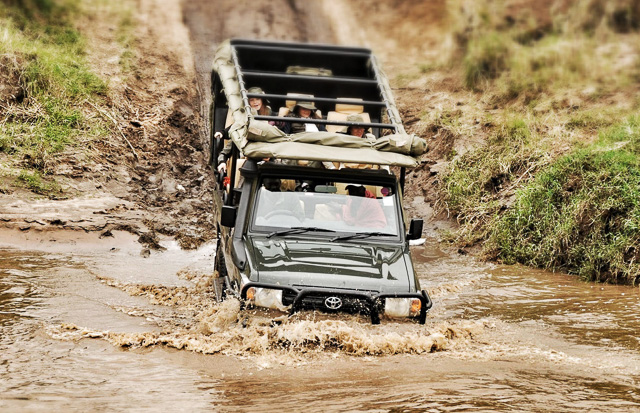 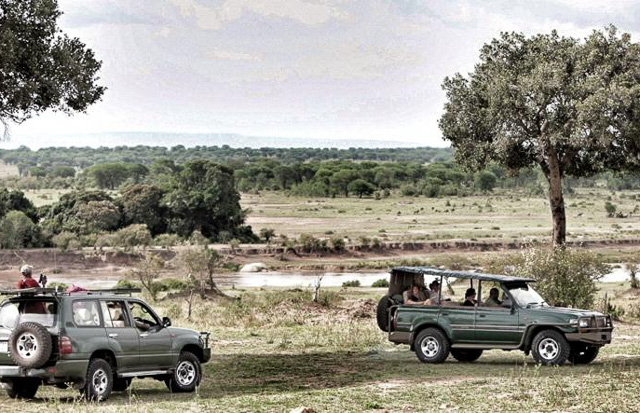 Despite the prolific study, no one is quite sure on how the wildebeest know which routes to follow, generally, though, their journeys happen in response to the rains, weather, and new grass. Such that the timing of when the swarming mass of beasts will be where changes annually. Some experts believe that the animals are reacting to lightning and thunderstorms in the distance and that wildebeest are able to locate rain from more than 50km away.

Here's a rough idea of when vast amount of the four-footed beasts and their friends will be where; yet it is advisable to get more current updates from Safari Guru at your time of planning.

Around January, the migration will be ending a southwards trek, moving with much noise and dust along the eastern edge of the Serengeti and into the famous Ngorongoro Crater — one of the new Seven Natural Wonders of Africa, the world's largest inactive and empty 30,000-hectare volcanic caldera. In the early months of a new year, the Serengeti grasses are lush from rain, drawing the herds – not only of wildebeest - but also hundreds of thousands of zebra and other plains animals. The wildlife is prolific here due to the nutritious grass, and because of this, it is here that the herds have their newborn calves. The animals calve in the same two to three weeks, and about some 8,000 new calves are born every day!

The wildebeest, with their fast-growing young, move northwest towards the fresh grass of the central Serengeti, drawing along with them thousands of zebra and smaller groups of antelope. By May, columns of wildebeest stretch for several kilometres as the animals start to congregate by the Moru Kopjes. Towards the end of May is the mating season; male wildebeest battle head-to-head and 'rut' while their journey continues 'at leisure,' with the wildebeest, zebra and gazelle continually grazing.

The movement gradually gathers momentum and the wildebeest start to mass in the Serengeti's Western Corridor in order to cross the Grumeti River, which they must cross in order to continue on their journey. Perhaps not as spectacular as the famous Mara crossings, but still a tense time for each migrating animal that faces the challenge of crossing the crocodile-infested river - one of many daunting and tense river encounters.

June is generally the start of the dry season, with large concentrations of wildebeest are in the Western Serengeti and on the southern banks of the Grumeti River. Moving into July, the hundreds of thousands of wildebeest and zebra continue to head north along the western edge of the park towards a very risky barrier: the Mara River infested with huge crocs and lined with predators. Later in July, the successful animals that have made it across the Mara River will now be found in the Mara. At this time, daily river crossings can be seen at the Mara and Talek rivers – both offering just incredible, unforgettable scenes. The rivers are sometimes in full flow. Very occasionally, it is a year of relatively gently flowing water, regardless the river's crocodiles and waiting predators take their share of confused and panicked beasts. There is no single crossing - some spots see a handful of animals; others see seething columns of animals crossing for hours.

By August, the herds have crossed the Mara River and are spread throughout the Masai Mara's northern region. By September to October, much of the main chaos has ended, and the migrating hordes gradually moved eastwards. But, the wildebeest will have to face the deadly waters of the Mara River once more on their return journey southwards.

After the East African short rains in late October and early November, the wildebeest generally begin theirs move down from Kenya and into the eastern limits of the Serengeti. By December, they are spread throughout the eastern and southern reaches.

The cycle continues as the calving season starts once again.