The Serengeti National Park Tanzania conjures up quintessential images of vast plains disappearing into the distance, and Serengeti does, indeed, mean "endless plains" in the Maasai language.

The plains are broken occasionally with roaming wildlife and punctuated with flat Acacia trees.  Stop! Look closely for the odd leopard or even lion (yup, here in Tanzania, no one has told lions they can't climb trees!)…

The sheer number and diversity of wildlife within the Serengeti is remarkable.  Elephant, buffalo, and Maasai giraffe, plus the many predators, lion, leopard, cheetah, and hyena, all hunting the many wildebeest, zebra, and other plains game such as Thomson's gazelle, impala, Grant's gazelle, topi, eland, and other antelopes that live here or migrate through. 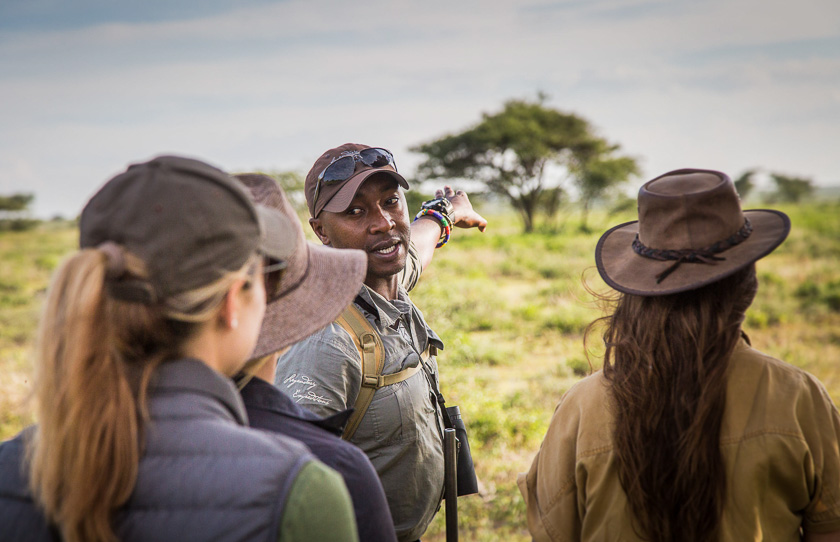 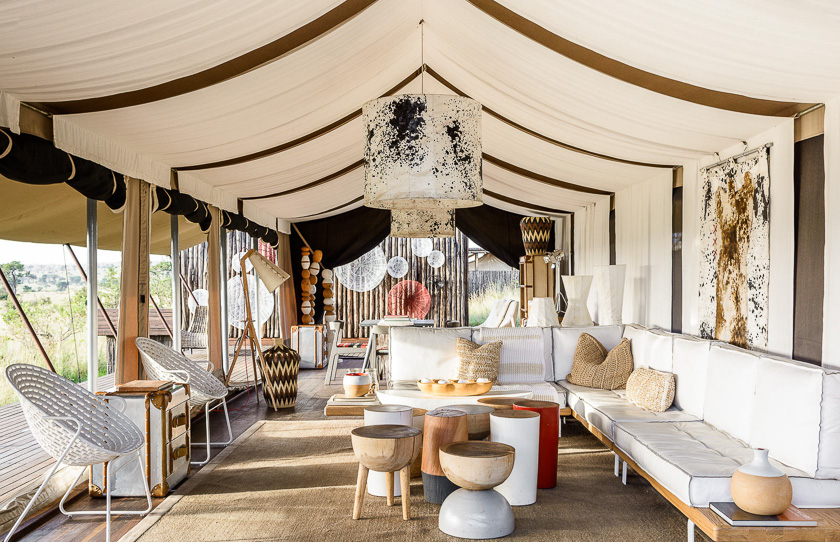 The vast and beautiful Serengeti is one of Africa's most awe-inspiring safari areas.  Some of these animals reside year-round in territorial home areas, particularly the north and west, which are excellent for safaris all year round.  But many of the wildebeest and good numbers of other zebra and Thompson gazelles are permanently on the move as part of the famed 'Great Migration' of which the Serengeti (and neighbouring Kenya's Maasai Mara) is part.

So, we know the Serengeti is vast (the size of Belgium!) and teeming with wildlife – so how do we organise the best safaris here?

Well, your choice really revolves around flying in or driving and whether you want to see the Great Migration! 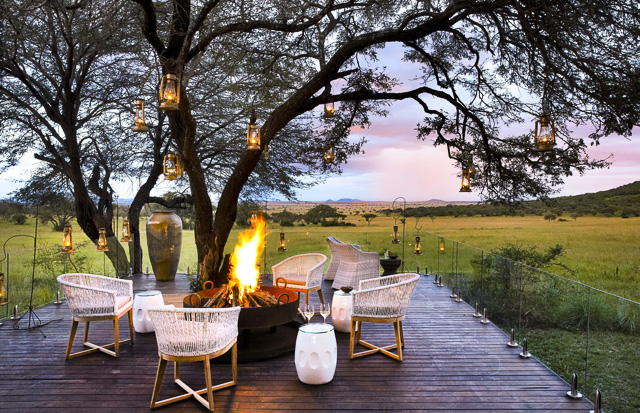 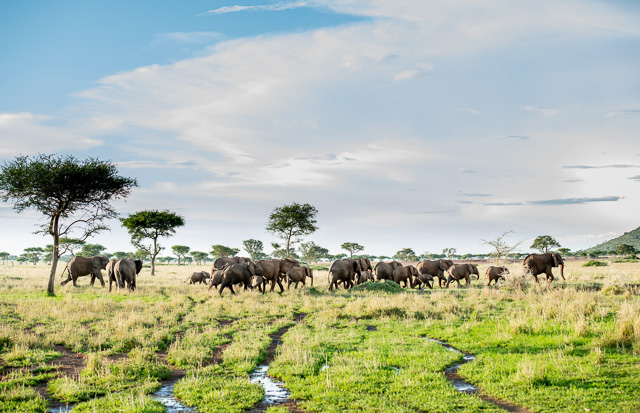 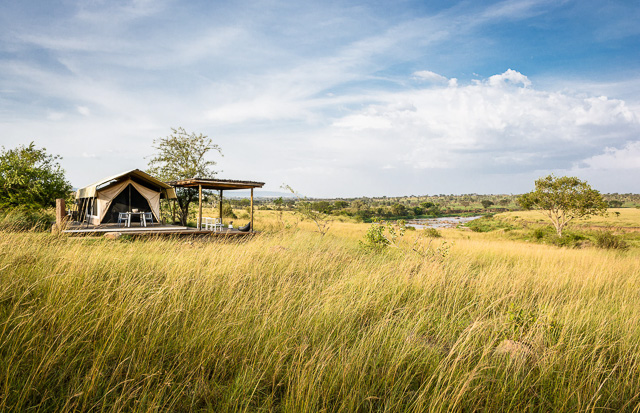 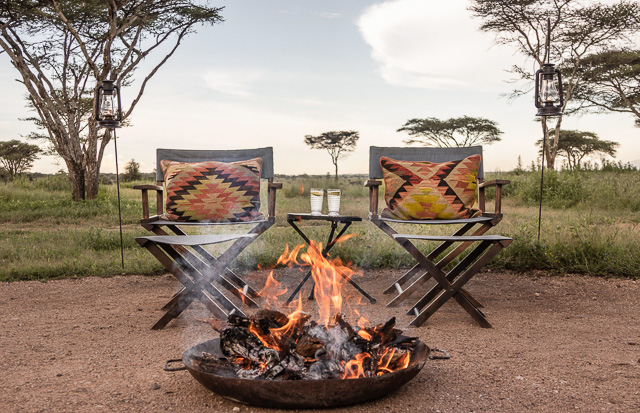 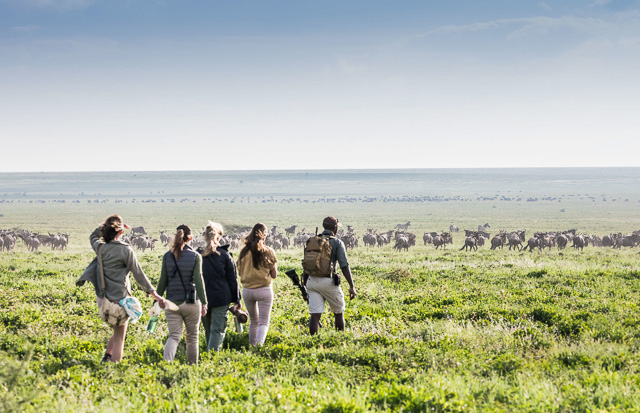 Want a taste of the Serengeti and to maximise your sightings in the shortest time?  Then this area may well be your best bet for fabulous wildlife sightings, at the heart of the Serengeti, a beautiful area with the famous Serengeti open plains broken with hills and kopjes to break the view.  The Seronera River provides year-round water, so it has one of the most significant amounts of resident wildlife, leopard, and many cats.  This all does come at a price, as its downside is it is also one of the busiest areas with the highest density of large, budget-type lodges, and it is always busy.

The migration passes through here in April/May (depending on the weather patterns, obviously!).

Places to stay include The Four Seasons Lodge Serengeti and Dunia Camp.

The Western Corridor and Grumeti

The Western Corridor narrows and continues almost to Lake Victoria, where its two rivers, the Grumeti and the Mbalageti, empty after running parallel to each other, providing lines of riverbank forest.  As such, it is wetter, more densely vegetated, and more woodland than other areas of the Serengeti.

The migration passes through here in May/June, with the Grumeti River being the first river crossing/water obstacle for the hapless swarm of beasts to cross.

The quietest part of the enormous Serengeti – it's more than worth a look – and spans the area up to the Kenyan border.  This is a hillier and, consequently, perhaps, a more beautiful part of the Serengeti – making a pleasant change from the flatter Southern plains.  It is best to visit this quiet area in September and October when the migration herds leave Kenya's Masai Mara on their way south.  The area is particularly great for seeing elephant and large lion prides.

Places to stay are all smaller camps offering a more intimate experience.  Here certain excellent mobile operators follow the migration, setting up in strategic places for the duration of the spectacle, such as Alex Walker Serian Serengeti, Lamai Serengeti, and Nomad's Serengeti Safari Camp.

Quintessential, classic Serengeti with its endless plains.  These are the short-grassed plains west of the Ngorongoro conservation area to the park's southeast.  The migration comes from late November to April, and this is when the area changes; hundreds of thousands of nodding, braying wildebeest cover the plains stretching out as far as one can see….

Another change comes around February when the female gnus give birth each at roughly the same time, so over a hundred thousand calves join their mothers and continue on their epic trek.

Without the sheer number of properties of the more Northern part of the park, Tarangire, has a variety of accommodations available.  From traditional tented safari camps to luxury options and larger lodges, plus some properties situated on land adjoining the park that can also offer guided walks and night drives.  Places include Serengeti Pioneer Camp and Sanctuary Kusini.

Drive-In? The Serengeti is part of the Northern Circuit and, maybe, indeed, often is enjoyed in a drive-in safari.  Typically, you will fly into Kilimanjaro airport, where your guide will collect you and drive/look after you for the duration of your stay throughout your safari in Tanzania.  Generally, you will be booked into camps and lodges on a "full board basis," with all meals and activities conducted by your guide.

This may be a more cost-effective option than flying – but this is dependent on the number in your party, and so, certainly for a solo traveller or couple, don't discount flying on the grounds of cost!  The real benefit of a drive-in safari is that you and your guide will get to know and understand one another; what your likes/dislikes are, how you like your day, and at what pace you enjoy travelling.  On the other hand, you may be covering extensive distances – although most of this is scenic and on safari itself!

Fly-In? It offers a more time-effective way to cover more ground and spend more time in camp while offering the magical and exciting experience of a scenic flight over iconic landscapes spotting the larger wildlife as you go!  It also allows you to reach more remote, off-the-beaten-track areas.

When going on a flying safari, you will be booked into each camp/lodge at their "Game Package" rate, which includes all meals and morning and afternoon safari activities.  This offers the perhaps, additional advantage that drives are with local guides specific to the camp and area and so are very up to date on animal movements with game drives in open-sided 4x4 safari vehicles.  Open vehicles are only available at the camps – you cannot drive the Northern Circuit in an open vehicle.

This is a constant, free-flowing phenomenon.  The exact timing and location of the wildlife congregation depend on the years' rainfall patterns and the funny gnu beasts themselves!  Few realise that the migration is actually a continual movement of beasts; with millions of wildebeest, hundreds of thousands of zebra, and Thomson's gazelle migrate together in search of better grasses, followed, of course, by many predators.

So, for ease, it's best to split this 'vast' area into smaller parts; the Central/Seronera Serengeti, The Western Corridor and Grumeti, Northern Serengeti, and the Southern Serengeti.

To extrapolate on the above; December to April is zebra and wildebeest calving time, and most of the migratory animals are in the Serengeti's southeast bordering the western part of the Ngorongoro Conservation Area.  This colossal body of animals is beginning to move towards the Serengeti's Western Corridor and the Grumeti Reserve by May.  Moving northwest, the swathes of beast pass through the Central Serengeti in June, arriving in the park's extreme north around mid-July, where the animals have to face crossing the crocodile-infested Grumeti and Mara rivers.  Fly camps, move location according to where the gnu's roam!  Allowing front row seats for this spectacle and are a reasonably affordable and fun experience of lux glamping!  These safari's can be arranged with the following operators which Safari Guru works closely with; Alex Walker Serian Serengeti, Lamai Serengeti and Nomad's Serengeti Safari Camp for those seeking something a little more private, including private vehicle and guide; Mkombe House Lamai; great for the family safari or multi-generational groups travelling together.  Read more on the Great Migration...

All this said, the Serengeti is a fabulous year-round destination; but you really will need guidance as to where is best and when!  Although the Great Migration is always on the tip of everyone's tongue, there are reasons to go to the Serengeti in the so-called "green season" and avoid it!  First, the areas where the Great Migration may be seen become hugely busy with people, which can be distracting.  Secondly, this means rates are lower outside of the migration seasons, and thirdly, the other parks, such as the Ngorongoro Crater Area, surrounding the Serengeti, are far less crowded.

Finally, it needs to be remembered that wildlife viewing is still excellent – as most predatory species (and other wildlife species) stay put and are territorial.  Hence, there is no need to follow the crowds.  Indeed, get the best of all worlds and split your trip into two Serengeti areas with differing accommodation types; maybe a luxurious lodge in the Grumeti and a fly tent in Northern Serengeti!

There are many greater Serengeti accommodation options available, and by emailing us, we will share our ideas offering higher-end luxury and the more basic bush experience, which can include Serengeti's peripheries offering several private reserves and concessions - north of the Western Corridor is the Grumeti Reserve.  Between the Ngorongoro Conservation Area and the southern Serengeti are the Maswa Game Reserve and Mwiba Wildlife Reserve.  These three reserves also offer an exclusive and luxurious safari experience, so let Safari Guru share our expertise and knowledge for a truly rewarding safari of a lifetime.