Many, even hardened safari enthusiasts, say it is life-changing.  Rwanda has over half of the world's critically endangered gorilla population offers the best organised, carefully managed, and most productive primate tracking in the world. This experience is difficult to find anywhere else on the planet. 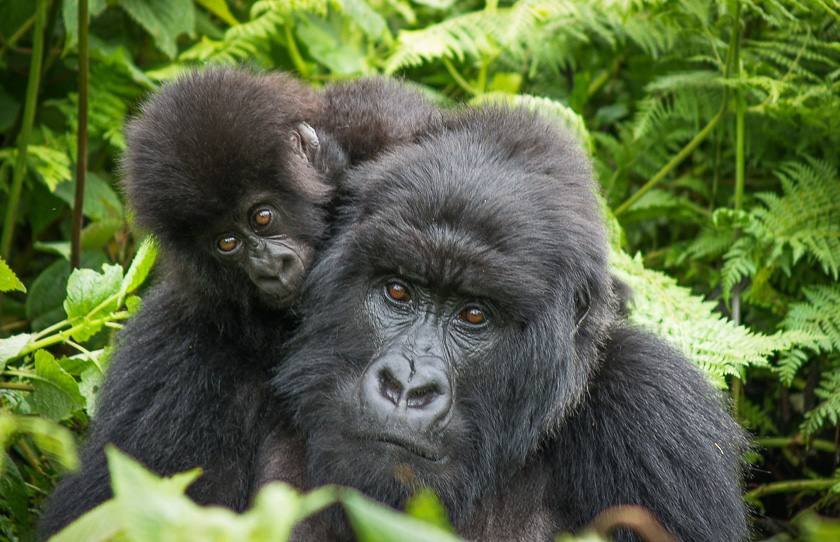 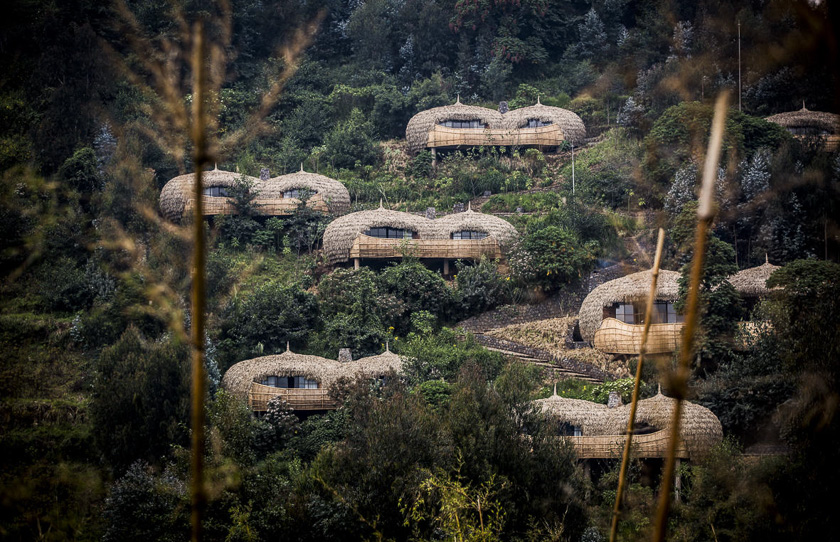 Set against the soaring mountainside and beautiful endless green hills of the Volcanoes National Park, expert trackers and guides lead small groups of similarly matched guests (in terms of fitness/ability) to identified and protected gorilla family groups. The trek through rain forest and bamboo-covered slopes leads to a precious and deeply enriching one hour with one of the twelve families of these habituated gorillas.

Here you'll be able to watch these beautiful, fierce yet gentle animals feeding, sitting, and interacting with one another. 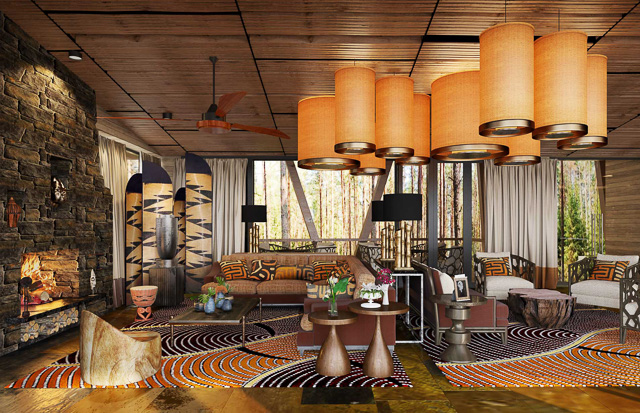 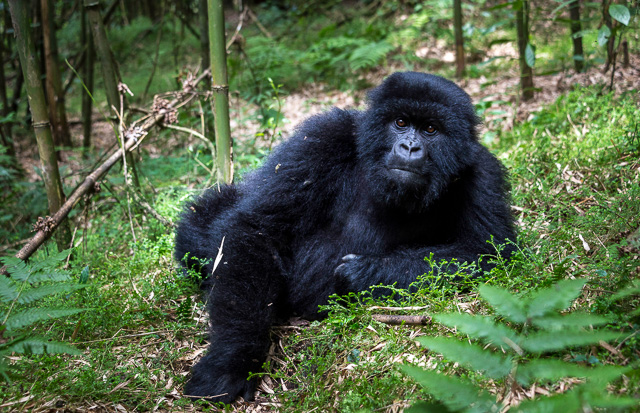 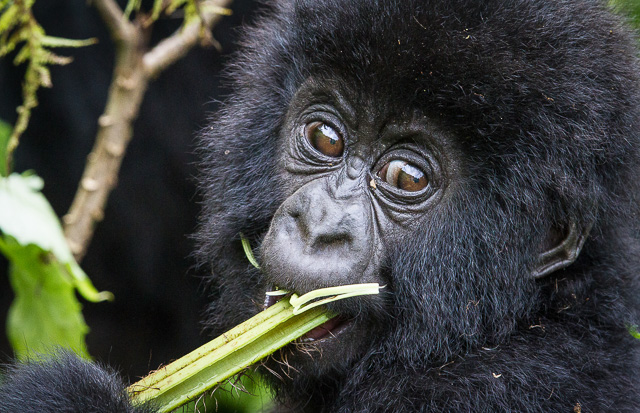 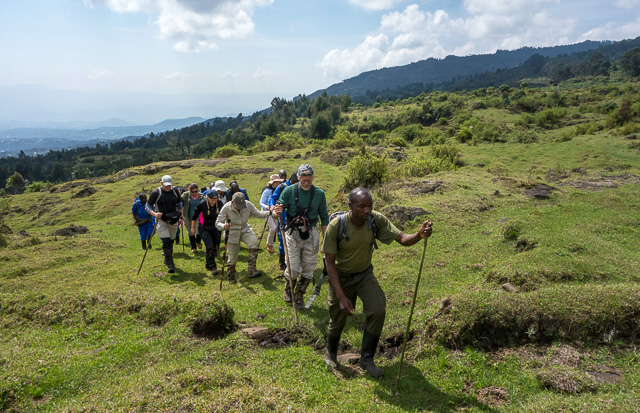 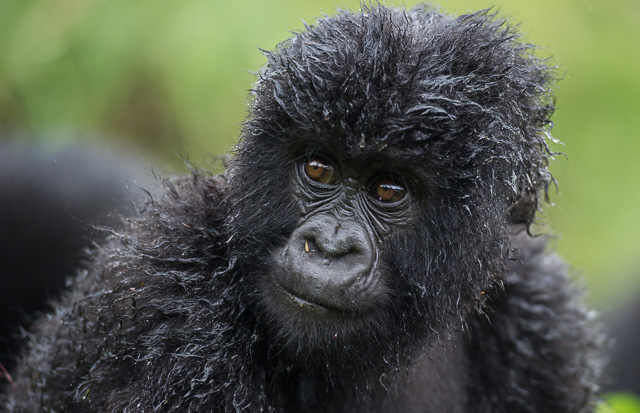 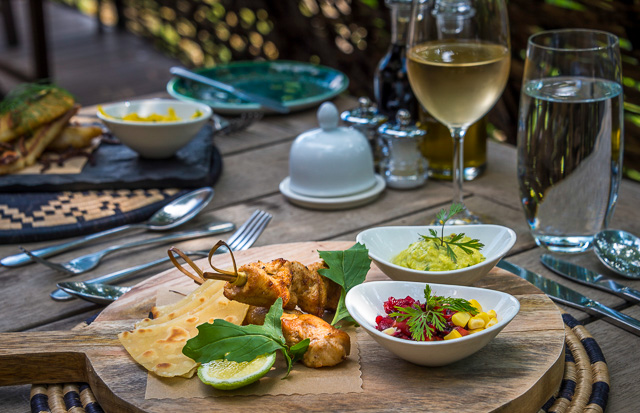 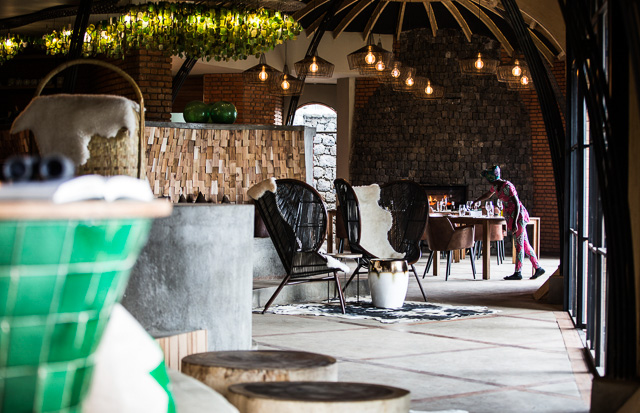 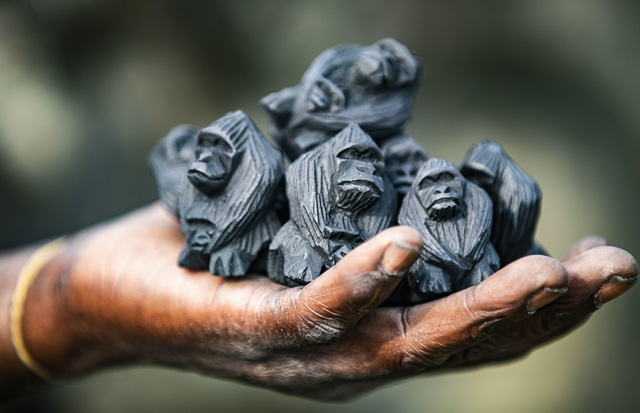 The Virunga Mountains is one home to the mountain gorilla, including the habituated mountain gorilla families. This scenic landscape is where Dian Fossey's famous and ground-breaking research was carried out; an area with five volcanoes, a mountainous, semi-tropical wet area covered in rainforest and bamboo. These mountains are a chain of eight active and inactive volcanoes in east Africa along the border of northern Rwanda, the Democratic Republic of Congo, and Uganda.

There are twelve families of mountain gorillas that may be visited. These families/troops are known as Susa, Geisha, Karisimbi, Sabyinyo, Amahoro, Agashya, Kwitonda, Umubano, Hirwa, Bwenge, Ugyenda, and Muhoza. Obviously, each troop is free to move around in the mountains; but they tend to stick to their preferred area, and each of the precious endangered troops is constantly monitored and protected by park rangers. The location of each troop is typically known, and the troops can be tracked with near certainty.

Only eight tracking permits are issued to visitors per troop per day to protect the gorillas from widespread obtrusion. This keeps your experience intimate but certainly means the experience must be booked in advance – through us or online.

The trek begins at the HQ of the Volcanoes National Park headquarters in Kinigi at 7 am. Then each visitor's fitness level is assessed, and guests are grouped with others of a similar ability level and be allocated a family group on the day. After a briefing on the protocols and rules for visiting the gorillas, the hike/walk to your assigned family begins.  Hikes up to each of the troops' various locations last anything from 30 minutes to four or more hours, reaching an altitude of between 2,500m and 4,000m. Porters are available to carry backpacks and cameras and offer a helping hand along the route; indeed, with advance planning, people with disabilities can be assisted, or even carried, to participate in this experience.

The price of the permit to track and visit with your allocated family includes a channeling of funds to the local communities. These funds help to build local infrastructure such as schools, roads, and health centres. Some monies also go to local farmers whose crops may be destroyed by the gorillas, ensuring a more peaceful future co-existence.  So your visit will genuinely make a positive impact. The Gorilla treks also provide much-needed meaningful employment for local people in roles from rangers and trackers to porters, drivers, and staff at tourist lodges.

This has led to a vital, symbiotic relationship.  The Baka people are indigenous to the Congo Basin. Today they are employed as animal trackers, this is vital as many Ba'Aka are natural-born animal trackers, but the traditional tracking skills were being lost to agriculture. Similarly, wildlife was being lost to agriculture. Each were raised learning the ways of the forest from their relatives and taught to hunt for game, collect honey, and forage for medicinal plants and mushrooms.

"They are really, really respected back in their villages," says Terrence Fou, who runs the gorilla habituation program. "Everyone wants to work in the program."

In these mountainous areas, rainfall is abundant, and showers can occur throughout the year. Rwanda's high altitude gives a pleasant tropical highland climate, albeit also a fair amount of rain. Temperatures don't change much month to month (we're on the equator here) but vary considerably between locations, depending on their altitude. From March to May, Rwanda's long rainy season makes rain heavy and persistent. June to mid-September is the long dry season; October to November is a shorter rainy season, followed by a short dry season from December to February. During the wet seasons, the air is cleared of dust, the vegetation is green, and photo opportunities abound. But, both of Rwanda's dry seasons also have light cloud cover moderating the temperatures and occasionally bringing light showers typically though there is less mud underfoot for trekking, although the air might be dustier.

Gorillas are not, of course, the only species in the park! So, tracking gorillas is not the only trekking in Volcanoes National Park. There are plenty of other interesting hiking trails here. Before you visit the gorillas, a guided walk into the mountains is a fantastic idea; you'll see the other wildlife in the forest, gaining a better overall understanding of the ecosystem, and get better acclimatised.

Additionally, if you're interested in tracing the footsteps of Dian Fossey, her grave is a 30-minute drive from the park headquarters and then two or three hours hike through the forest, to above 3,000m altitude.